The pianist Fred Nardin and the saxophonist Jon Boutellier have maintained a musical complicity since 2007. They were both educated at the National Conservatory of Music of Paris, but also during Parisian jam sessions. Together, they lead this quartet, joined by bassist Patrick Maradan and drummer Romain Sarron. Released in early 2016 on the label Gaya Music, their record Watt's reflects their “straight ahead” jazz, mastered but resolutely oriented toward composition and arrangement. Nardin and Boutellier are among the leaders of the energetic Amazing Keystone Big Band, whose record Peter et le Loup... et le Jazz, an adaptation for jazz big band of the famous work of Prokofiev, won the Académie du Jazz award for the best album of French Jazz in 2013. This brand new album also features their colleagues David Enhco (tp) and Bastien Ballaz (tb), as well as the singer Cécile McLorin Salvant.

“Watt's shows a measured boldness and a radiant mastery.” - Fara C. - L 'Humanité
“By listening to such representatives of the new generation, we really feel that jazz is immortal.” Philippe Vincent - Jazz Magazine (4 etoiles)
“A very good record (...) compositions that capture one’s attention: they have a kind of majesty, open poetic horizons, and make us dream.” Michel Contat – Telerama (ff )

There are no up-coming events 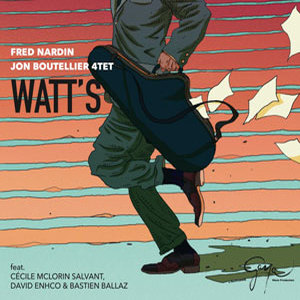