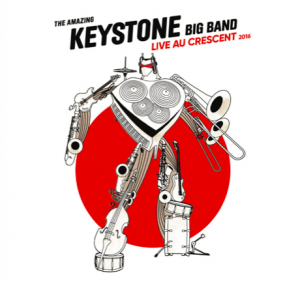 Made up of the most brilliant young soloists of the younger generation, the Keystone Big Band has been touring France since 2010. With their creations Pierre et le loup... et le jazz (2012) and Le Carnaval jazz des animaux (2015), they have helped expose a young audience to the joyous sounds of jazz big band. In parallel with this role of transmission, the band has multiplied the number of collaborations with prestigious artists: Cécile McLorin, Quincy Jones, James Carter, Stochelo Rosenberg, Bill Mobley...

What was missing from this great ensemble, however, was a more personal album, one featuring the sophisticated arrangements and originality of the soloists but also, and most importantly, the energy of a concert.

This has now been achieved with the Live au Crescent 2016 concert, a faithful representation of what Bastien Ballaz, Jon Boutellier, David Enhco, and Fred Nardin—artistic directors and founding members of the band—had in mind when they imagined this adventure: a big band formed for the simple pleasure of playing original music together.